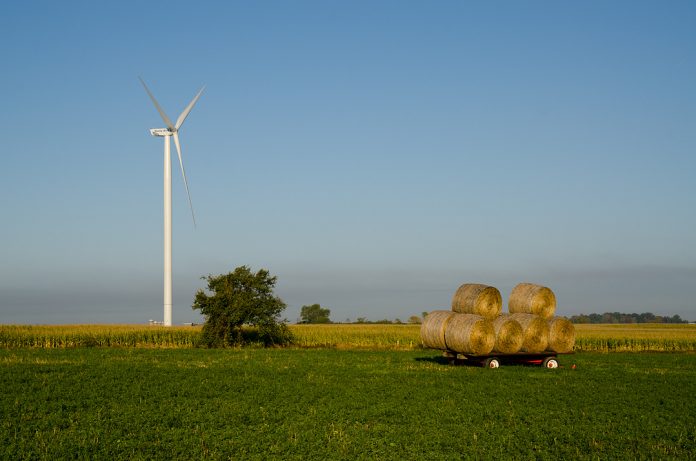 Wind power is obtained when the kinetic energy of the wind is transformed into electricity. Wind energy has been exploited by humans for thousands of years. Today, it is one of the world’s fastest-growing renewable energy sources.

The advantages of wind energy include an unlimited, free, renewable energy source that has low operating costs and uses land efficiently. However, there are also some disadvantages. Wind power is a highly intermittent energy source, leading to variable power generation and more complex supply versus demand management. Noise and visual pollution can be detrimental to the quality of life for residents living nearby. This article focuses on noise and its possible impact on surrounding communities.

How Is Wind Farm Noise Generated?

Wind turbines emit a relatively low but recognizable noise. The noise is mainly generated by turbulent air flow interacting with the rotor blades or other solid objects during blade rotation. This can produce a pulsing noise like “swishing” or “thumping,” as shown in Figure 1.

The type of noise observed depends on distance from the wind farm and weather conditions. The pulsing noise is technically referred to as amplitude modulation (AM) and the pulse rate is approximately once per second. Some noise is also produced by mechanical components such as gearboxes and other moving parts. This noise can have a tonal character, making it easily distinguishable above background noise — which has a more balanced frequency spectrum. The tonal noise may also be amplitude modulated, causing it to vary in loudness each second.

The rapid expansion of wind farms has been accompanied by concerns regarding potential adverse noise impacts, including sleep disturbance, daytime sleepiness, psychological distress, reduced health, and a lower quality of life. Some argue that these claims are unsubstantiated and reflect nocebo effects (occurrence of a negative outcome to an intervention due to negative beliefs) exacerbated by mixed quality information, misinformation, media reports, and anti-wind farm websites.

Multiple factors not directly related to wind farm noise (WFN) may also contribute to perceived disturbance, including living environment, noise sensitivity, economic benefits, visual effects, and attitudes toward wind farms. On the other hand, some residents living near a wind farm have abandoned their properties at significant personal and financial cost, while others have implemented expensive sound insulation measures, illustrating the value that individuals place on peaceful surroundings. Despite the influence of many confounding factors, it is likely that some individuals are adversely impacted by WFN, although the extent of this issue remains uncertain.

Among WFN characteristics, AM is of particular research interest as many previous studies have shown that it can contribute to annoyance and possible sleep disturbance. AM typically occurs during the evening and nighttime during stable environmental conditions which are favorable for AM generation. AM is a highly variable phenomenon that depends on meteorological conditions, distance from the wind farm, and wind farm operating conditions. Associated variations in the AM characteristics make AM challenging to detect and quantify.

The best way to detect wind farm AM is for an acoustic expert to listen to audio data collected near a wind farm. However, when several months of continuous data are collected, this method is not practical and becomes unfeasible. Therefore, several automated methods of AM detection have been proposed, and many of these have been implemented in research and commercial applications. Prior to this study, the performance of these methods had not been systematically evaluated using a benchmark data set.

To create such a data set for AM detection purposes, a person listens to a specific number of audio files and decides whether AM is present. In this study, 6000 10-second audio files were randomly extracted from a database of a year’s worth of acoustic measurements at two residences located near different wind farms. AM samples in this subset were then identified by a single scorer using a listening experiment. The randomly extracted data made it possible to compare the diurnal (across the day and night) and seasonal variation of AM with previous studies that used automated AM detection methods. Most importantly, the benchmark data set was used to develop an advanced AM detection method based on machine learning. The new method substantially outperformed widely used AM detection techniques and achieved a classification performance close to that of humans. This new algorithm was then applied to detect AM accurately and reliably in long-term acoustic data sets measured near wind farms located in Flinders University’s backyard in South Australia.

To investigate seasonal and diurnal variations in WFN, the Flinders University team measured outdoor and indoor acoustic data at three residences located between approximately 0.62 to 2.49 miles (1 and 4 km) from South Australian wind farms. They then applied their AM detection algorithm to identify the prevalence of AM, which is the percentage of time that AM was present. The team found that outdoor AM was two to five times more prevalent during the nighttime, compared to the daytime. They also observed an association between AM prevalence and sunset and sunrise, as shown in Figure 2.

On average, indoor AM occurred 1.1 to 1.7 times less often during the nighttime compared to outdoor AM. However, the indoor variation in loudness, or AM depth, was higher than the outdoor variation in loudness. The research team also wanted to see how often the presence of AM was considered annoying to residents living at the studied locations, so they asked them to complete a noise diary, as discussed in the next section.

Disturbance Reported When AM Was Present

This study used the longest analysis period to date to examine seasonal variations in WFN and to determine how often and at which times residents reported disturbance from WFN. Despite an extensive advertising campaign, only four residents agreed to take part in the study and only two residents completed sufficient noise diary entries for meaningful analysis.

Both residents reported annoyance throughout the year, with the highest and lowest number of reports in winter and summer, respectively, as shown in Figure 3. All noise events were self-reported from inside the house, predominately in the bedroom. On average, Residents 1 and 2 recorded at least one annoyance period per day on 30%, and 16% of the days of the year, respectively. During winter months, Residents 1 and 2 reported annoyances for up to 45% and 50% of the days, respectively. The higher number of annoyance recordings may have occurred due to the longer sundown period during winter compared to other seasons. Although, this could potentially be influenced by other factors such as different times spent indoors.

Where To Go From Here?

As the sample includes participants from four separate study groups, there also will be the opportunity to compare how different study populations respond to noise disturbance. Preliminary results from the pilot study support the presence of noise level dependent effects on sleep and annoyance, including differential responses to WFN compared to traffic noise. However, results from the main laboratory study and potential future studies are needed to establish if, and to what extent, annoyance and sleep disturbance occur in response to specific WFN features.

For more information, check out these papers, as well as our previous article about the same research study, Wind Turbine White Noise.