On January 8, 2023, QatarEnergy made a final investment decision (FID) with Chevron Phillips Chemical Company LLC (CPChem) to build a US$6 billion integrated olefins and polyethylene facility at Ras Laffan Industrial City, Qatar. Known as the Ras Laffan Petrochemicals complex, QatarEnergy will retain a majority 70% share of the project, with CPChem controlling the other 30%. Chevron and Phillips 66 each hold a 50% stake in CPChem.

QatarEnergy said that the Ras Laffan Petrochemicals complex will begin production in 2026 and consist of an ethane cracker and 2.1 MTPA of ethylene capacity. If all goes according to plan, that will make the complex the largest ethylene production facility in the Middle East and one of the largest in the world. In addition to the ethane cracker, the facility will include two polyethylene trains with a combined output of 1.7 MTPA of high-density polyethylene polymer products. All told, the Ras Laffan Petrochemicals complex would boost Qatar’s overall petrochemical production capacity to almost 14 MTPA.

For context, Dow’s Texas-9 ethylene cracker in Freeport, Texas, has a capacity of 2 MTPA. In October 2021, Dow announced a plan to build a net-zero ethylene cracker with a capacity of 1.8 MTPA that is expected to cost at least US$8 billion, or US$1 billion per year through 2030. According to the Energy Information Administration (EIA), the United States had about 40 MTPA of ethylene capacity in 2020.

SCJV, a joint venture company between South Korea’s Samsung Engineering Company Ltd. and Taiwan’s CTCI was awarded the engineering, procurement, and construction (EPC) contract for the ethylene plant. The EPC contract for the polyethylene plant was awarded to Italy’s Maire Tecnimont. Emerson was awarded the main automation contract. “This marks QatarEnergy’s largest investment ever in Qatar’s petrochemicals sector and the first direct investment in 12 years,” said Saad Sherida Al-Kaabi, Qatar’s Minister of Energy. “It will double our ethylene production capacity, increase our local polymer production from 2.6 MTPA to more than 4 MTPA, and place the utmost emphasis on sustainable growth and the environment. There is no doubt this cornerstone investment in Ras Laffan Industrial City marks an important milestone in QatarEnergy’s downstream expansion strategy. It will facilitate further expansion in the downstream and petrochemical sectors in Qatar and reinforce our integrated position as a major global player in the upstream, liquefied natural gas [LNG], and downstream sectors. This will be further enhanced once the new world-scale petrochemical project in Orange, Texas, comes online in partnership with CPChem, executed by our joint venture Golden Triangle Polymers Company. We are delighted to enter this exciting new venture with CPChem. Together, our large and diverse portfolio will not just help meet the world’s growing needs for advanced plastics and petrochemicals but will also enable balanced growth and facilitate human development in a responsible and sustainable manner.”

The Ras Laffan Petrochemicals complex FID comes less than two months after QatarEnergy and CPChem took a FID on the US$8.5 billion Golden Triangle Polymers Plant on the US Gulf Coast in Orange, Texas, a city located about 113 miles (183 km) east of Houston. The two companies created a joint venture (JV) known as the Golden Triangle Polymers Company LLC, with CPChem controlling a 51% equity stake and QatarEnergy holding a 49% stake.

Like the Ras Laffan Petrochemicals complex, the Golden Triangle Polymers Plant is expected to be operational by 2026 and includes a 2.08 MTPA ethane cracker and two 1-MTPA, high-density polyethylene units. CPChem said that the project should have around 25% lower greenhouse gas emissions than comparable US projects.

Over the summer of 2022, QatarEnergy began awarding stakes in its North Field Expansion East (NFEE) LNG project. The US$24 billion to US$30 billion project is expected to consist of four 8-MTPA trains, expected to enter service by 2025. After NFEE is complete, QatarEnergy will consider adding another 16 MTPA through its North Field Expansion South (NFES) project as early as 2027. If NFEE and NFES are completed, it would bring Qatar’s total LNG export capacity to 125 MTPA, making it by far the largest LNG export nation in the world.

Over the fall and winter of 2022, QatarEnergy finalized several deals with major integrated oil and gas majors. TotalEnergies invested US$1.5 billion for a 25% share in a JV for one of the NFEE LNG trains. In other words, it got 2 MTPA worth of capacity or 1/16 of the project. ExxonMobil and Shell signed similar deals, while ConocoPhillips and Eni each signed deals for 1/32 of the project. QatarEnergy retained a 75% ownership of the NFEE.

Partnership with United States and European firms has been a core part of Qatar’s energy industry since oil was first discovered in the country in 1935. Most of Qatar’s early major projects were funded and developed by the predecessors of the same companies investing its petrochemical and LNG projects today. Much of Qatar’s existing LNG export capacity is owned by ExxonMobil, with Shell and TotalEnergies holding smaller shares.

Influence On The Future Of Oil And Gas

Qatar has an undeniable impact on the global supply and demand balance for LNG and petrochemicals. More than 60% of the country’s gross domestic product (GDP) comes from oil and gas. Given its position, as well as its heavy exposure to oil and gas, the country is known for heavily investing no matter the market cycle, allowing it to take advantage of downturns.

Instead of choosing to ignore environmental, social, and governance (ESG) factors, further undercut its competitors, and boost emissions and profits in tandem, Qatar has been vocal about its commitments to growing oil and gas production while also reducing its carbon footprint. QatarEnergy built its climate change mitigation, operational responsibility, and social and economic development frameworks around Qatar National Vision 2030 and the United Nation’s Sustainable Development Goals (SDGs). The country publicly supports the Paris Agreement’s goal to limit global warming to well below 3.6°F (2°C) compared to pre-industrial levels. It has also committed to reducing its carbon intensity from upstream operations by 25% by 2035 and by 35% for LNG operations by 2035. By 2030, Qatar plans to end routine flaring and achieve a 90% natural gas portfolio by reducing the share of oil production.

Qatar is also investing in renewable energy and carbon capture and storage (CCS). It expects CCS technology to capture 11 MTPA of carbon dioxide (CO2) by 2035. Its 4C Framework is built around growing LNG production, reducing oil production, and increasing the share of low- and zero-carbon sources in its energy mix. 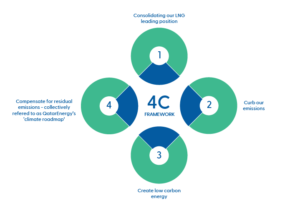 QatarEnergy’s 4C Framework was announced prior to its 2022 and 2023 petrochemical and LNG mega deals. Given that its integrated oil and gas western investors have their own net-zero and ESG goals, it’s likely no accident that QatarEnergy would also publicly commit to reducing emissions in an effort to attract environmentally conscious foreign investment.

Qatar’s partnerships with western countries and its commitments to reducing emissions is excellent news for the long-term growth of the oil and gas industry. The more LNG projects prove to be the best balance between cost, safety, and reliability while also being a better alternative to other fossil fuels, the more jobs and investment should flood into the industry.

The Stage Is Set For The Hydrogen Economy To Shine, But Can It Handle The Spotlight?