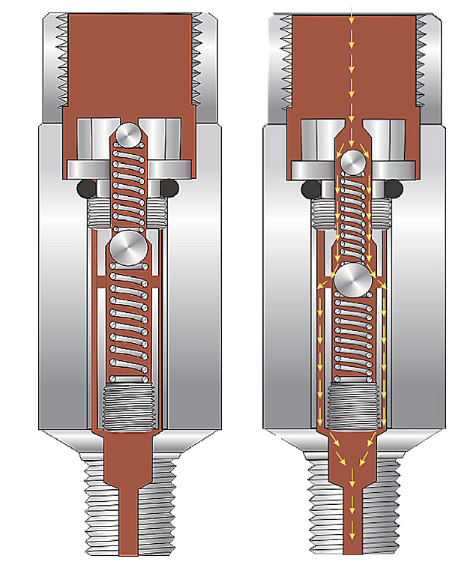 Patton Divider Block Systems (Patton) introduced its patented check valve design in 2019. Since then, the company has installed thousands of its self-protecting cartridge check valve (CCV) on gas compressors. The durability of each CCV has prompted Patton to announce a lifetime warranty.

“Over the last three years, we’ve sold and installed thousands of check valves in compressor service and have had zero failures or returns,” said Curtis Roys, founder and president of Patton. “The industry has never had a lifetime warranty on any injection check valves. In fact, no one has ever warranted a force feed divider block system check valve for more than 12 months.”

Headquartered in Midland, Texas, Patton specializes in the design, installation, and troubleshooting of divider block lubrication systems for all high-speed and integral compressors. According to Roys, industry standard check valves often fail due to hot gas and trash entering the check valve each time it opens to inject lubricant into the compressor cylinder or rod packing gland. When the check valve opens, the seating surfaces are exposed to hot gas and trash in the gas stream. The hot gas migrating into the check valve heats the sealing surfaces or allows trash to enter the check valve, causing it to fail prematurely. When trash in the gas stream migrates into the check valve it can lodge between the sealing surfaces, allowing gas to migrate upstream into the tubing runs and ultimately end up in the divider block. When gas is introduced into the force feed system, the divider block pistons will lock up, causing the system to over pressure and blow the rupture disc, which in turn causes compressor shutdowns.

“Standard check valves are not designed to eliminate gas from entering into the sealing surfaces and do not have the ability to keep hot gas and trash out of the system, so they continue to fail,” said Roys. “Of course, then mechanics and operators purchase another identical check valve, install it, and expect a different result. Other products that offer check valve protection require two separate components to accomplish what the CCV does in a single, one-piece design. The Patton CCV corrects all inherent problems associated with both standard compressor injection check valves, and other devices in the compressor industry that are advertised as a check valve protector.”

According to Roys, when industry-standard check valves are installed in a vertical or horizontal position, hot contaminated gas will eventually migrate into the ball and seat, causing the check valve to fail prematurely.

Roys stated that most injection check valves are not installed in the correct position to allow for an oil barrier to protect the sealing surfaces. “Force feed lubrication system check valves have been manufactured using the same design for more than 70 years and those designs do not eliminate hot gas or trash from reaching the sealing surfaces, causing failure.”

Roys continued, “There are two injection check valve protectors in the industry, the check valve protector [CVP] and Omni Gas Trap. We designed and patented the CVP to form an oil barrier between the check valve and hot gas and trash in the cylinder and those added components worked. The problem with both the CVP and Omni Gas Trap is that both devices require two separate components to accomplish the same thing Patton’s CCV does in a one-piece design. This adds additional cost due to buying two separate components and they do not have a lifetime warranty.

“After constantly receiving calls from compressor operators needing replacement check valves, we realized it was time to fix the inherent problem with compressor force feed injection check valve failures,” said Roys. “It took several prototypes, plus plenty of field and lab testing, but we developed the CCV, which protects itself from failure without additional components. Patton’s CCV corrects all inherent problems associated with both industry injection check valves and devices that are advertised as a check valve protector.”

The CCV is designed with a 1/4” female top entry x 1/8” male outlet that can be adapted to install in both vertical and horizontal positions. “This design enables the operator to have national pipe thread [NPT] connections in a straight line with each other which allows for torquing and positioning the device correctly,” said Roys. “The two NPT connections eliminate the problem associated with over torquing because the addition of a second NPT thread allows incremental movement [tightening] of the check valve mounted in any position. This design eliminates the need to align a 90-degree elbow with the tubing lines which causes over tightening, inherent with the check valve utilizing the previous designed check valve protectors.”

According to Roys, the CCV is designed with two internal exit paths for the oil to pass through and those paths create a liquid barrier to protect the ball and seat from being exposed to hot gas and trash in the gas stream.

“Because the CCV forms an oil barrier in the internal barrel, we have eliminated the need to purchase a secondary component, such as a check valve protector or the Omni gas trap, to protect the check valve,” said Roys. “Simply stated, the design of the CCV providing an oil reservoir outside of the cartridge that houses the double ball sealing arrangement protects the sealing surfaces of the check valve from debris, hot oil, and/or high-temperature gas for the life of the compressor.

“The internal dual-flow path of the CCV eliminates another problem associated with conventional check valves, which incorporate a single flow path for lubricant,” continued Roys. “A single flow path can be plugged from debris in the gas stream. If debris becomes lodged in one of the two flow paths of the CCV the oil flows through the secondary path. This dual-flow path adds years of trouble-free service for the compressor operator, which resulted in a lifetime warranty of the CCV.”

In addition to increased reliability, Patton’s CCV was designed with sustainability in mind. “With traditional check valve designs, whenever a check valve goes bad, the operator throws it away and buys a replacement. This effectively raises their environmental footprint and negatively impacts its environmental, social, and governance [ESG] rating. Taking it one step further, a manufacturer must then build another check valve, using up more raw materials in the process.”

“Patton’s CCVs have surpassed three years of operation in the field,” added Roys. “Installing Patton’s CCV improves compressor runtime because it eliminates shutdowns due to failed check valves. With more than 8000 check valves installed on compressors and no failures, why wouldn’t we back it with a lifetime warranty? It’s time to raise the industry standards. Not only can we eliminate waste, but we can also save the operator a substantial amount lost revenue by keeping their compressors online.”