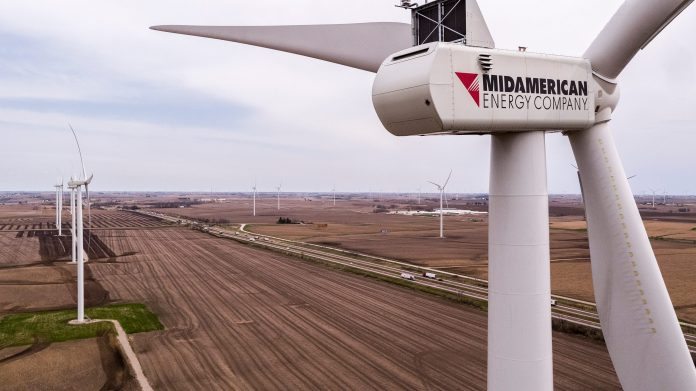 MidAmerican Energy (MidAmerican) announced plans for a US$3.9 billion renewable energy project in Iowa, including wind and solar generation, and the exploration of new technologies to advance the company’s transition to net-zero greenhouse gas emissions.

In a filing with the Iowa Utilities Board, MidAmerican’s proposed project, called Wind PRIME, would add 2042 MW of wind generation and 50 MW of solar generation.

“Iowa is a renewable energy leader, thanks in large part to MidAmerican Energy’s clean energy commitments and investments that are a true advantage for our state,” Iowa Governor Kim Reynolds said. “MidAmerican’s Wind PRIME is a commitment and investment on a whole new level, cementing Iowa’s clean energy leadership for many years to come. Beyond that, the company’s commitment to study and pursue emerging clean energy technologies will help Iowa meet the growing demand for a sustainable economy that manages our carbon footprint.”

Wind PRIME, MidAmerican’s 13th renewable energy generation development, is named to convey that now is the prime time to embark on this opportunity, and to reflect that although wind is an essential component, the project also includes solar energy generation and the examination of new clean energy technologies that will be an important part of the net-zero transition.

“As MidAmerican continues to progress toward delivering 100% renewable energy to our customers, we are also preparing to meet an important milestone of net-zero greenhouse gas emissions,” said Kelcey Brown, president and CEO of MidAmerican. “The Wind PRIME project will position us and our customers for a sustainable future, while ensuring we continue to deliver affordable and reliable energy.”

While thermal generation will remain a necessary part of the portfolio to ensure reliability for customers, the completion of Wind PRIME, in conjunction with existing noncarbon resources, is projected to result in an overall reduction of carbon dioxide (CO2) by nearly 15.4 million tons (14 million tonnes), or approximately 75%, from 2005 levels.

Wind PRIME also proposes the study of emerging technologies, including energy storage, carbon capture, and small modular nuclear generation, that will help expand MidAmerican’s ability to meet its customers’ demand for renewable generation as well as lower-carbon and noncarbon generation.

MidAmerican estimates that the Wind PRIME project will create more than 1100 full-time jobs during the construction phase and another 125 full-time positions for ongoing operations and maintenance.

In addition, Wind PRIME will provide an average of US$24 million-plus per year in local property tax payments on wind turbines and solar facilities, as well as more than US$21 million in annual landowner easement payments.
If approved, the company plans to complete construction in late 2024.