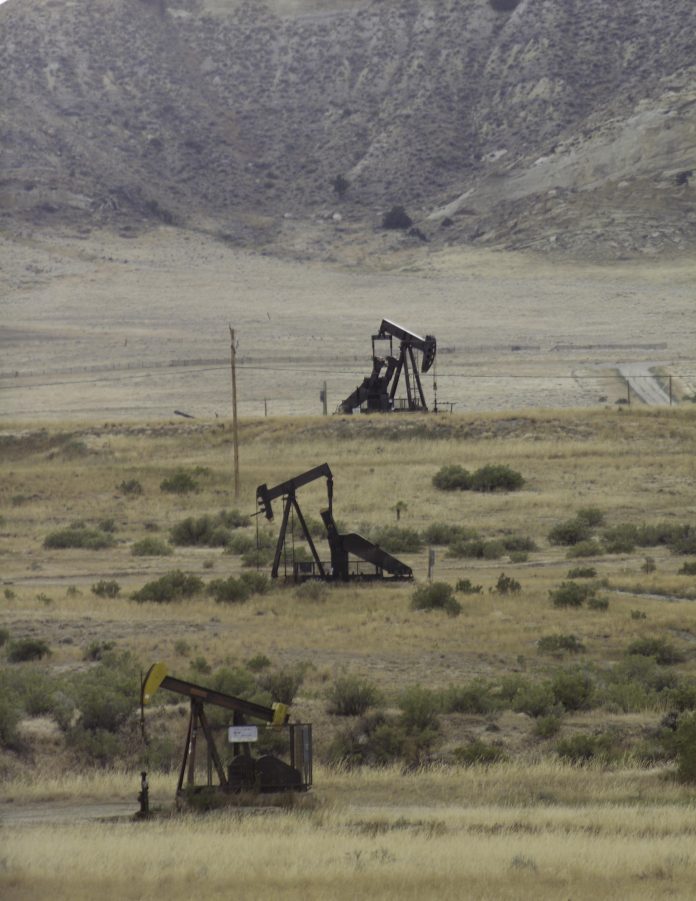 It is has become global consensus that human-caused emissions of carbon dioxide (CO2) need to drop roughly 45% from 2010 levels by 2030 and reach net zero by 2050 to avoid catastrophic consequences of climate change. The US Energy Information Administration (EIA) has published its annual International Energy Outlook 2021 (IEO2021). As the planet races toward 2050 and its self-imposed emissions deadline, data from the EIA doesn’t look promising. Per the EIA report, CO2 emissions are expected to increase worldwide through 2050.

What follows in an excerpt from the EIA’s Energy Outlook 2021.

If current policy and technology trends continue, global energy consumption and energy-related CO2 emissions will increase through 2050 as a result of population and economic growth.

In the Reference case, global emissions rise throughout the projection period, although slowed by regional policies, renewable growth, and increasing energy efficiency policies, fuel choice, technology, and economic factors decrease carbon intensity and energy intensity, but they do not halt emissions growth.

Global energy‐related CO2 emissions rise through 2050 in the IEO2021 Reference case, largely driven by non‐OECD (Organization for Economic Co-operation and Development) countries where 2050 emissions increase by 35% over 2020 levels, compared with a 5% emissions growth in OECD countries. Energy‐related CO2 emissions tend to follow gross domestic product (GDP) and population growth, which typically correlate with increasing energy demand. However, changes in the fuel mix and energy efficiency directly affect the degree to which emissions correlate with energy consumption. 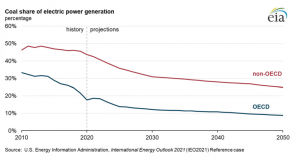 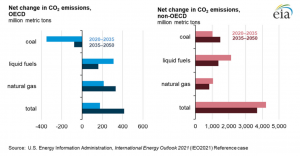 Total energy‐related CO2 emissions increase in both OECD and non‐OECD regions through 2050 in the IEO2021 Reference case. The Reference case represents an assessment of current laws and policies, including those directed at reducing CO2 emissions. Mandated efficiency, fuel, and technology goals are generally more prevalent in OECD countries. We project that net CO2 emissions across OECD countries increase by 175 million metric tons between 2020 and 2035 and then increase by more than 400 million metric tons between 2035 and 2050 because, under existing laws and regulations, government climate policies do not explicitly increase in stringency after 2030.

Energy‐related CO2 emissions grow much more rapidly in non‐OECD countries, largely as a result of increases in energy demand associated with population and economic growth. Net CO2 emissions across non‐OECD countries increase by 4,200 million metric tons between 2020 and 2035, followed by a 3,700 million metric tons increase between 2035 and 2050. The relatively slower emissions growth in the second half of the projection period is largely linked to increases in renewable energy and energy efficiency.

Emerging policy directives that are not law, such as commitments made by China’s government in 2020 to achieve carbon‐neutral status by 2060, could contribute to lower emissions in the region, but we do not include them in the Reference case because they are not specific policies.

Growth in heavy industries — such as basic chemicals, non‐metallic minerals, and steel — is a major component of overall economic growth in non‐OECD economies because of the rapid expansion of physical assets and infrastructure. Energy‐intensive manufacturing is difficult to decarbonize without major restructuring.

The strong growth in heavy industries in non‐OECD countries generally outpaces incremental energy efficiency improvements, leading to higher emissions in the IEO2021 Reference case. As an example, the basic chemicals industry, which has the majority of its gross output in non‐OECD countries, uses a high amount of natural gas and petroleum liquid feedstock. Reducing carbon intensity and emissions in this industry would require either a major structural shift in the production process or a shift to a more circular economy that relies less on commodity chemicals.

Similarly, the non‐metallic minerals and steel industries rely heavily on coal. Incremental energy efficiency improvements in these industries would require difficult and costly structural changes, such as employing more recycling or material substitution.

India exemplifies the role that heavy industries play in non‐OECD emission trends. India’s industrial sector is its largest consumer of coal, and the country’s coal emissions more than double over the projection period.

The Reference case provides a baseline from which to measure the impact of various assumptions.

You can view the report in its entirety by visiting International Energy Outlook Full Narrative (eia.gov)