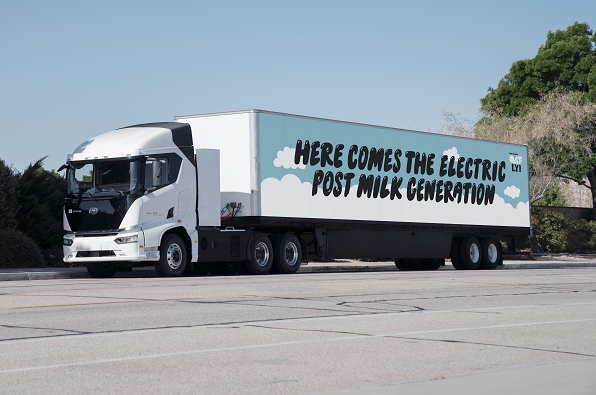 Oatly Group (Oatly), the world’s largest oat drink company, announced the introduction of electric powered, heavy-duty trucks to its ground transportation in North America. Finding initial success with using electric trucks as part of its transportation operations in Europe beginning in 2020, Oatly is now expanding the initiative to include an initial fleet of five electric trucks in the United States. As part of its ambition to set an example as a future company, Oatly aims to shift to 100% sustainable ground transport for its products and materials by 2029. The introduction of electric trucks within US operations helps build toward this ambition.

“Oatly is on a mission to transform the global food system into one that is healthier for people and the planet. A critical part of that system includes the transportation we and the broader food and beverage industry utilize across the supply chain,” said Chi Mbachu, vice president of logistics at Oatly, North America. “Any improvements we can make across our business to have less of an impact on the environment, including within our transportation logistics, is a step in the right direction and something we constantly strive for at Oatly. We’re thrilled to get these electric trucks on the road in North America and continue our global transition to sustainable ground transportation.”

Based on estimates from Einride, utilizing this fleet of five trucks in the United States will save Oatly an estimated 882,000 lb. (400,000 kg) of CO2 over the next year, as compared to using diesel trucks on the same routes. That’s a carbon footprint reduction of 87% on selected routes, as compared to using diesel trucks. Oatly is utilizing its fleet of five electric trucks from its two currently operating factories in the United States, located in Ogden, Utah, and Millville, New Jersey. Multipurpose routes are scheduled routinely from Oatly plants to nearby recycling and packaging partners.

As one of the first companies in Europe to implement a fleet of heavy-duty electric trucks beginning in October 2020, Oatly operates four electric trucks across various routes in the region, specifically in Sweden, which operate 24/7 live transports between Oatly production facilities and warehouse partners. In Europe, Oatly sees an 87% reduction in CO2 utilizing the fleet of four electric trucks, compared to diesel equivalents on the same routes and expects to save 2000 tons (1814 tonnes) of CO2 in the European region by the fifth year of the initiative’s operations. Eighteen months since launch, Oatly said its projection remains on track.