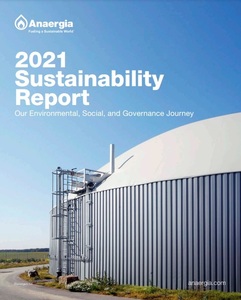 Anaergia Inc. announced it has released its 2021 ESG report. The company completed its initial public offering in June 2021, so the ESG report marks its first as a public company. The report highlights Anaergia’s ESG achievements for 2021. The company projects it helped avoid a net total of 512,575 tons (465,000 tonnes) of carbon dioxide equivalent (CO2e) greenhouse gas emissions, which is about 41 times more than what the company’s operations produced. The analysis includes estimated emissions avoided at facilities under Anaergia’s operational control, as well as third-party facilities commissioned since 2010 that operate using Anaergia’s technologies at design specification. The report also includes an overview of Anaergia’s social and governance practices.

“Our inaugural report is focused on the ‘E’ in ESG, naturally, because our company was created to address the climate crisis,” said Andrew Benedek, chair and CEO of Anaergia. “This report quantifies the effects of Anaergia’s technologies and projects, which address a leading cause of climate change —jm the problem of methane emissions from waste. We are turning this methane emissions problem on its head. Instead of allowing waste to cause climate change, we are using it to create a much-needed carbon-negative renewable fuel. Doing so can address about two-thirds of all point-source methane emissions.”

Other highlights from the report include:

Installed capacities since 2010 of approximately 8.82 million tons (8 million tonnes) per year of feedstock processing capacity, 5 million MMBtu per year of renewable natural gas (RNG) production capacity, and 134 MW of renewable electricity generation capacity. These capacities include Anaergia Build-Own-Operate (BOO) facilities that are in operation and in execution, as well as third-party facilities commissioned since 2010 that use Anaergia’s technology solutions at design specification.

The company has invested nearly US$400 million in clean energy infrastructure globally to date, created 91 green jobs in 2021, and adopted seven new governance policies and codes.