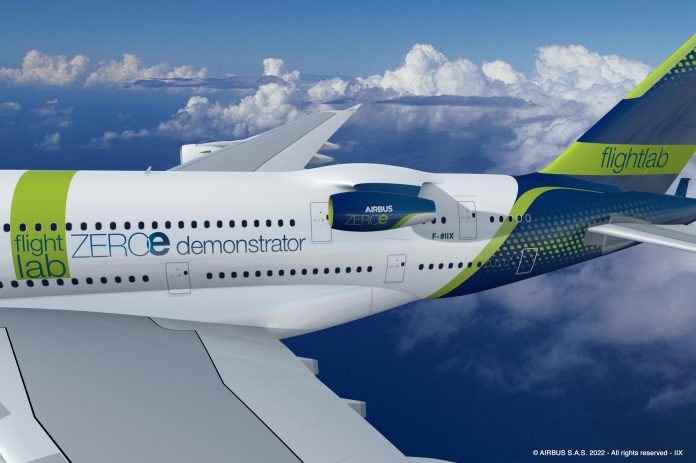 Airbus has signed a partnership agreement with CFM International (CFM), a 50/50 joint company between GE and Safran Aircraft Engines, to collaborate on a hydrogen demonstration program. The program’s objective is to test a direct combustion engine fueled by hydrogen, in preparation for entry-into-service of a zero-emissions aircraft by 2035. The demonstration will use an A380 flying testbed equipped with liquid hydrogen tanks prepared at Airbus facilities in France and Germany. Airbus will also define the hydrogen propulsion system requirements, oversee flight testing, and provide the A380 platform to test the hydrogen combustion engine in cruise phase.

CFM will modify the combustor, fuel system, and control system of a GE Passport turbofan to run on hydrogen. The engine, which was assembled in the United States, was selected for this program because of its physical size, advanced turbomachinery, and fuel flow capability. It will be mounted along the rear fuselage of the flying testbed to allow engine emissions, including contrails, to be monitored separately from those of the engines powering the aircraft. CFM will execute an extensive ground test program ahead of the A380 flight test.