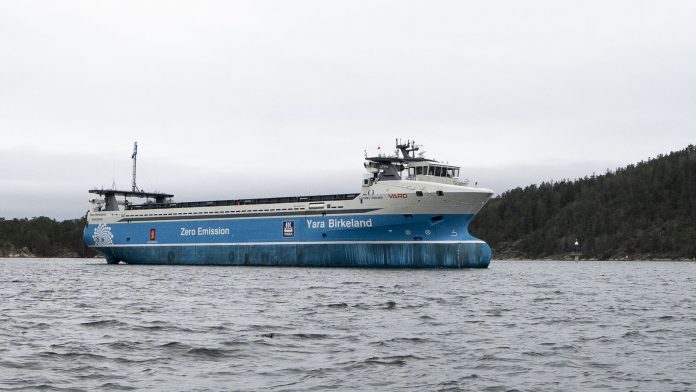 Yara Birkeland, the world’s first autonomous and fully electric container ship, will commence commercial operations while beginning a two-year test period, prior to entering full autonomous operation on a route off the coast of Norway. The vessel completed its maiden voyage to Oslo in mid-November and then sailed on to Porsgrunn, the southern Norwegian production site of Yara International, a fertilizer manufacturer and the vessel owner.

Once the test period is completed, the Yara Birkeland will navigate on a completely autonomous basis transporting containers products from Yara International’s production plant in Herøya to the port of Brevik.

The Yara Birkeland is powered by a Leclanché high-energy, lithium-ion, 6.7-MWh battery system with integrated liquid cooling to ensure optimum operating temperature. The battery system, manufactured in Switzerland, is fitted with lithium-ion cells which are produced at Leclanché’s production facility in Willstätt, Germany, and battery modules made in Switzerland.

To prevent a fire on the open sea, Leclanché specially developed the modular DNV-GL certified Marine Rack System (MRS). Each battery string contains gas and smoke detectors, redundant thermal monitoring, and a cooling system to prevent overheating and thermal incidents. This Leclanché MRS consists of 20 strings with 51 modules of 32 cells each, for a total of 32,640 cells. The battery system has built-in redundancy, with eight separate battery rooms. If multiple strings are emptied or stop working, the vessel can continue its operations.

Yara International is pursuing a zero-emissions strategy with the all-electric drive solution: the vessel’s operation will displace around 40,000 truck journeys per year and the associated NOx and CO2 emissions. It also reduces noise and air pollution while in port. The batteries are charged automatically with electricity from renewable sources.