According to data from S&P Global Platts, US natural gas production surged to more than 95 Bscf/d on November 24, 2021, hitting a nearly two-year high that comes as domestic operators stage a prewinter push that has recently begun to cool the bullish sentiment in the forward gas market. The new high caps an almost eight-week drive by producers to lift output from stubbornly depressed levels in September, when production averaged just 90.1 Bscf/d following extensive damaged caused off- and onshore by the Category 4 Hurricane Ida.

The recent surge comes almost entirely from a handful of onshore fields. In Appalachia, production climbed to a record-high 34.7 Bscf/d earlier this month after a few producers there adjusted fourth-quarter guidance to reflect anticipated gains in output ahead of the startup to Transcontinental Gas Pipe Line’s 580 MMscf/d Leidy South expansion project.

In the Haynesville, anticipated gains in Gulf Coast LNG feed gas demand are likely behind the uptick in gas production there. In November, output from the Texas-Louisiana shale has set successive record highs at more than 14.1 Bscf/d, S&P Global Platts Analytics data showed.

In the Permian, gas production has averaged nearly 13.6 Bscf/d this month to date, just 90 MMscf/d below a monthly record in March. The uptick comes as crude oil producers in West Texas continue to ramp up drilling activity in response to elevated prices for both oil and refined products.

In Appalachia, the Haynesville, the Permian, and other basins, historically high prices and strong internal rates of return have been giving producers a big incentive to ramp up drilling activity, especially ahead of the upcoming winter heating season. In a recently published IRR analysis, Platts Analytics estimated half-cycle, post-tax returns in the Permian’s Delaware Basin at nearly 60% with the Midland Basin now in the upper 40% range.

In much of the Marcellus and Utica, IRRs in November range from the low- to upper- 40% range. In the Haynesville, returns have also edged up to historical highs at just over 40%. Strong wellhead economics have fueled a steady gain in the US rig count since late summer. In the week ending November 17, US drilling rigs reached a nearly 20-month high at 683, data published by Enverus showed. 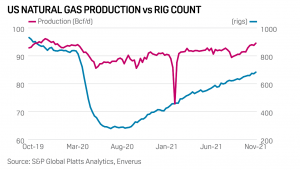 While recent production gains in Appalachia and the Haynesville have been achieved with relatively little change in rig numbers, the Permian and other oil-focused basins have been leading the surge in activity in the third and fourth quarters. In the Permian Basin, the Eagle Ford and the SCOOP-STACK drilling rigs have approached pre-pandemic levels as of mid-November.

Strong internal rates of return and the recent upstream push by producers come as cash and forward gas prices hover just below historic highs. At market close November 23, the Henry Hub winter strip settled at an average US$4.78, up from a forward average at US$2.73/MMBtu one year ago.

Since early October though, winter forwards prices have drifted lower, tracking the recent uptick in supply. After topping US$6.50/MMBtu, the Henry Hub January 2022 contract has dipped nearly US$1.50/MMBtu, or about 22%, from its high. Forwards prices for December 2021 and February 2022 have witnessed similar losses recently.

The shifting market sentiment comes not only on the uptick in US gas production, but also a late-season surge in inventory levels. On November 24, the US Energy Information Administration (EIA) reported its first withdrawal of the heating season for the week ending November 19. At their current level, US inventories are now just 58 Bscf below the prior five-year average, EIA data showed.