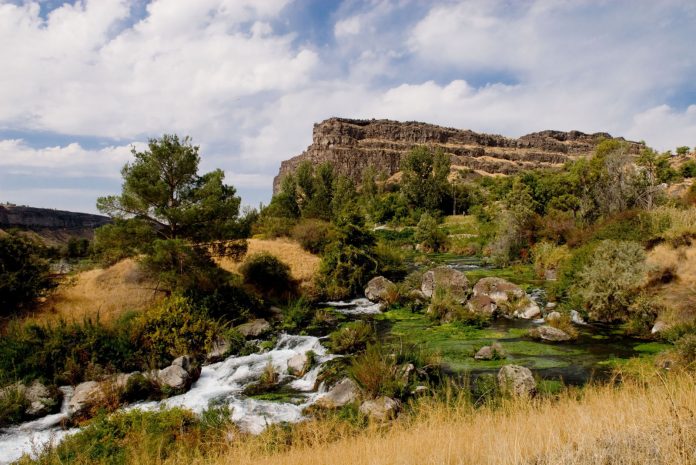 A report from the International Renewable Energy Agency (IRENA) shows the impact renewable energy has, not only on lowering carbon emissions worldwide, but also on creating jobs around the globe.

Headquartered in Abu Dhabi, with offices the United States and Europe, IRENA is the principal platform for international cooperation to advance the transformation of the global energy system. A global intergovernmental organization established in 2011, IRENA promotes the widespread adoption and sustainable use of all forms of renewable energy, including bioenergy, geothermal, hydropower, ocean, solar and wind energy in the pursuit of sustainable development, as well as energy access, energy security, and low-carbon economic growth and prosperity.

Below is an excerpt from its latest report, “Renewable Energy and Jobs Annual Review 2021.”

The full report is available at www.irena.org.

The renewable energy sector employed 12 million people, directly and indirectly, in 2020. The number has continued to grow worldwide over the past decade. The solar photovoltaic (PV), bioenergy, hydropower, and wind power industries have been the largest employers.

These employment trends are shaped by a multitude of factors. Key among them is the rate at which renewable energy equipment is manufactured, installed, and put to use (largely a function of costs and overall investments). Costs, especially of solar and wind technologies, continue to decline. With relatively steady annual investments, lower costs have translated into wider deployment. An increase in investments would boost future job creation, even allowing for growing labor productivity. Policy guidance and support remain indispensable for establishing overall renewable energy roadmaps, driving ambition, and encouraging the adoption of transparent and consistent rules for feed-in tariffs, auctions, tax incentives, subsidies, permitting procedures, and other regulations. 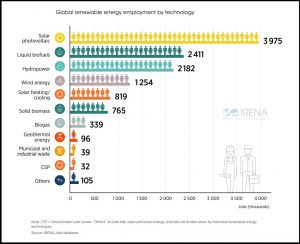 By the end of the year, strict pandemic lockdowns had ended in most countries, allowing construction to resume. In China and the United States, for example, more than 40% of the year’s installations took place in the last quarter. In Europe, by contrast, activities were more evenly spread, with the last quarter being the weakest.

IRENA estimates global solar PV employment at close to 4 million in 2020, up from 3.8 million in 2019. The global total includes an estimate of 342,000 off-grid jobs for South Asia and parts of Africa. Of the leading ten countries, seven are in Asia, two in the Americas and one in Europe. Together, the top ten accounted for almost 3.4 million jobs, or 85% of the global total. Among all countries, Asian nations held 79.4% of the world’s PV jobs, reflecting the region’s dominance in manufacturing and strong presence in installations. The Americas had 8.8% of all jobs; Europe held a 6% share (with members of the European Union accounting for 4.9%); and the rest of the world another 6%. 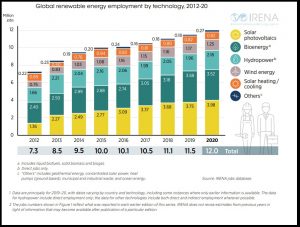 Global biofuels production fell from 161 billion liters in 2019 to 151 billion in 2020, a drop of 6%, reflecting the pandemic’s effect on transport energy demand and the fact that lower crude oil prices made biofuels less competitive. Ethanol output fell 8%, while biodiesel production (much smaller in volume than ethanol) held almost steady. The United States and Brazil remained the world’s dominant ethanol producers, with a combined 83% share, while biodiesel production was more spread out geographically, with Indonesia, the United States, and Brazil producing 45% of the global total and the European Union another 31%.

IRENA estimates worldwide biofuels employment in 2020 at 2.4 million, a slight decline from 2019. Fuel processing requires relatively few people, and the bulk of jobs are in the agriculture supply chain, planting and harvesting feedstock. But many of the latter are casual and seasonal in nature, rather than full-time, formal jobs. There are also distinctions between plantation workers and independent farmers, with varying levels of labor productivity

Latin America accounts for 44.4% of all biofuel jobs worldwide and Asia (principally Southeast Asia) for 33.6%. The more mechanized agricultural sectors of North America and Europe translate into smaller employment shares – 11.8% and 10%, respectively.

Highly mechanized operations in the United States required a direct and indirect labor force of about 271,000 people in 2020. Labor intensity is also relatively low in the European Union, where biofuels employment was estimated at about 239,000 jobs in 2018, the most recent year for which complete data are available.

Other producing countries depend much more on human labor. With about 871,000 jobs, Brazil remains the world’s biggest liquid biofuels employer. According to revised estimates, Colombia’s biofuels output declined for a second year in a row to 950 million liters in 2020. Employment factor calculations suggest that the number of people involved was down more than 10%. As is true for biofuels producers in Southeast Asia, Colombia’s 194,000 jobs in the supply chain are not all full-time equivalent (FTE) jobs.

COVID-19 notwithstanding, by the end of 2020 the wind energy sector saw a strong expansion. Capacity additions almost doubled to 111 GW, from 58 GW added in 2019. China added by far the most (72 GW), followed by the United States (14 GW). Ten other countries installed more than 1 GW each.

The COVID-19 pandemic caused numerous disruptions, including in the supply of raw materials and other inputs. For example, balsa – a material used in blades – was in short supply because of severe pandemic impacts in Ecuador. In response, some companies invested in balsa production in countries like Papua New Guinea, while others switched to PET plastics.

Overall employment in onshore and offshore wind grew slightly to 1.25 million jobs worldwide in 2020, from 1.17 million in 2019. IRENA’s gender survey indicated that women hold about a fifth of these jobs. Most wind employment is concentrated in a relatively small number of countries. China alone accounts for 44% of the global total. Asia represented 54% of global wind jobs in 2020, while Europe accounted for 27% (of which EU members 21%), the Americas for 17%, and Africa and Oceania for less than 3%.