Alberta sees 320 days of sunshine a year and ranks near the top of Canadian provinces with about 50% of daytime hours in the sun.

And now that all 36,000 solar panels have been installed at Alberta Solar One (ABS1), Enbridge’s newest solar energy facility is soaking up that big-sky potential. 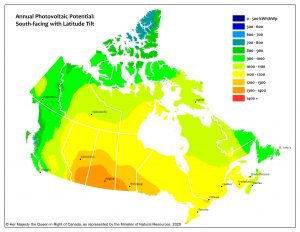 After construction began last fall, the 10.5-MW facility near Burdett, Alberta entered service earlier this month. As Enbridge’s first solar self-power project in Canada, ABS1 will supply a portion of the crude oil and liquid requirements for the Canadian Mainline — marking another step for Enbridge’s company-wide journey to net-zero emissions by 2050.

“These types of projects fit into our larger growth plans to reduce emission intensity by 35% and be net neutral by 2050,” said Vern Yu, Enbridge executive vice president and president of the company’s liquids pipelines business. “To help get there, we’re using solar self-power to generate electricity for our operations, modernizing our systems to improve efficiency and advance other technologies.”

In the United States, Enbridge’s New Jersey-based Lambertville Solar Project offsets a portion of the electric load at a nearby compressor station and helps power the compressor units that keep natural gas flowing along the cross-continent Texas Eastern Transmission pipeline. Its Heidlersburg Solar Project in Pennsylvania will do the same when it enters service later this spring.

“This project is a win-win for Enbridge’s power team as we continue to grow our renewable energy portfolio and support Enbridge’s sustainability goals,” says Matthew Akman, Enbridge’s senior vice president of strategy and power. “We’re excited to see our first Canadian self-power project come online, and we will continue to invest in opportunities across North America that generate energy to power our operations.”

ABS1 was co-developed by Enbridge and Morgan Solar, a Canadian solar technology company. In addition to advancing Enbridge’s self-power initiatives, the project will also help to commercialize Morgan Solar’s SimbaX proprietary performance boosting solar technologies that delivers more energy per kW installed, boosting the panel’s energy production. According to Enbridge, ABS1 is the first utility-scale application of this technology.

Emissions Reduction Alberta (ERA) committed US$10 million in funding to the Alberta Solar One project. Later this spring, about 50 grazing sheep will be brought into manage the grass growth onsite at the project.